Hydrogen is the Fuel of the Future for Transportation

It’s easy to forget how useful hydrogen is – the element is the single most abundant substance not just on Earth, but throughout the universe, according to a report by Deloitte. But the energy sector is no longer taking hydrogen for granted.

In the Middle East, countries such as the UAE, Saudi Arabia, and Egypt have announced wide-reaching hydrogen production and distributions initiatives to market low-carbon hydrogen.

In Abu Dhabi, UAE, a private company will spend more than $1billion to build a solar-powered hydrogen and ammonia plant, initially including 100MW of solar capacity, with plans to reach 800MW in the future. The hydrogen that it produces will be converted into ammonia for export.

Global oil and gas warehouses and shipping with Aramex

Meanwhile, Saudi Arabia is analysing ways to become a global supplier of hydrogen, primarily using carbon capture technologies. Additionally, through its $500 billion gigaproject NEOM, the country is building a green hydrogen plant (the first of many), which is set to become operational by 2025. This is expected to make NEOM a green hydrogen hub for production, usage, and export.

On the other hand, Egypt has announced the world’s first large-scale waste-to-hydrogen plant, which will have the capacity to produce 300,000 tonnes of green hydrogen annually, once operational. The $3billion project has received preliminary approvals.

Currently, hydrogen consumption is less than 2% of global energy, and is considered very low. However, according to the Hydrogen Council, this consumption could reach 25% by 2050. Moreover, by 2030, the market share for hybrid or fully electric vehicles is expected to increase to 30%, which would equal 450 million electric cars.

The hybrid or fully electric vehicles market is expected to increase to 30% by 2030, which would equal 450 million electric cars.

So, how are hydrogen and electric cars dependent on each other?

As we move forward towards a cleaner energy mix, the automotive industry is looking at fuel cell electric vehicles (FCEV), or vehicles that use hydrogen as a fuel source. According to consulting firm PreScouter, electric vehicles remain popular only due to an absence of infrastructure for storing and transporting hydrogen. However, this could change in 10 years, and FCEVs could become the most appealing option.

Global oil and gas warehouses and shipping with Aramex

The advantages of FCEVs

Automobiles with fuel cells using hydrogen can make use of quick refuelling, as they don’t need to be plugged in to charge and are relatively similar to traditional filling stations.

Fuel-cell vehicles also have an extended driving range, as demonstrated by the Toyota Mirai, which set the Guinness World Record for a hydrogen car with the longest range. On a single fill, the car was able to travel 1,359.9km.

Fuel-cell vehicles have an extended driving range and can travel 1,359.9km on a single fill.

Automobiles with hydrogen fuel cells emit only water steam, thus making it a clean fuel without any pollution. This could massively contribute to reducing greenhouse gas emissions, which are emitted most by the transportation sector – passenger and cargo – which contributed 29% of the total as of 2019.

The logistics industry is making a conscious effort to shift to greener solutions; Aramex has started testing fully electric vehicles within its fleet in the Saudi market in 2020. It was the first logistics company in the Middle East to start using hybrid vehicles.

E-commerce shipping and warehouses with Aramex

What are the challenges for hydrogen-fueled vehicles?

Transporting hydrogen and its distribution currently pose specific issues. According to industry specialists, these concerns are related to hydrogen’s chemical and physical properties; its ability to cause fragility in other materials; its ability to quickly escape from its container; its flammability; and that limited external energy is required for ignition.

Over the last few years, different systems have become more efficient and have allowed hydrogen to be transported in a gaseous or liquid state. Nevertheless, reports suggest that to make hydrogen more reliable and economically sustainable, the industry needs to make significant progress in terms of R&D as well as continue to build a suitable supply network. 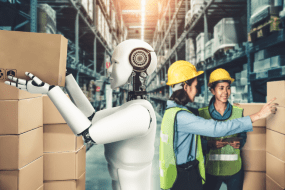 Oil & Gas Professionals: Your Next Co-Worker Could be a Robot

How the Semiconductor Shortage Affected the Automotive Industry